Thanks for reposting this Phil.

Have you ever felt guilty after swallowing yet another pill to mask symptoms of a disease or injury? Have you wondered if there was a better approach to physical (and spiritual) well-being than going on an antibiotic regimen or ingesting medicines designed to reduce inflammation? Silvia Casabianca causes us to ponder such questions in her new book, “Regaining Body Wisdom: A Multidimensional View,” published by Eyes Wide Open.

Casabianca’s mantra is that most of our remedies for discomfort and disease are at odds with the body’s natural responses to various types of invasion or imbalance. In her view, much of what is labeled conventional medicine overlooks and often hampers the necessary and natural communication between organs and the flow of vital energy that maintains health. 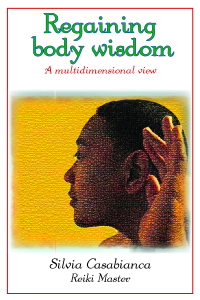 One of the simplest examples is that, when suffering from illness and…

We spend most of our lives disconnected. 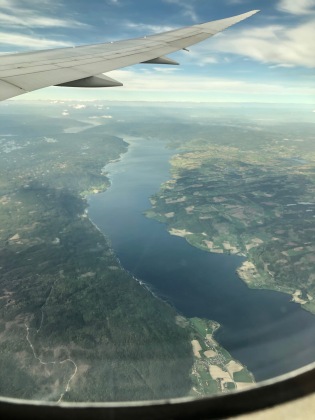 Disconnected from the planet

The world is becoming increasingly polarized, our awareness of separation grows and the spending habits we have adopted disregard the responsibility we have with caring for the planet. Our fall from paradise –as a metaphor– seems to refer precisely to the beginning of this disconnection from nature that happened when humans transition from hunter-gatherer societies to become shepherds (Abel) and farmers (Cain). With the progress of agriculture, private property, States, armies and a new type of relations between men and women soon appear.

In a world progressively displaced towards urban life[1], we not only have we lost the acuity of our senses, but our instinct and intuition. Let’s take the example of a hunter: he has to learn to listen to the animal that stealthily approaches, identify the marks it has left on the ground, refine his ear to identify where a sound comes from. He needs to be able to see, feel the signs that his prey leaves on the road. In his job as a hunter, the individual needs a type of sight that would allow him to identify a target at a great distance and pursue it with his eyes. This refinement of his intuition, of his senses, of his abilities, makes him a more efficient hunter. We have lost instinct and intuition. The sharpness of our senses has deteriorated. We rely on external gadgets or additaments to make up for the loss of our senses.

Our disconnection from nature in modern life is such that we are unable to anticipate the impact that material “progress” has on our lifestyle, health, others and the planet from which we derive our sustenance. When we eat a hamburger we can’t see the relation between its fat content and the damage that a diet rich in lipids can produce on our immune system, and eventually the arteries, which years later could increase the risk of suffering a heart attack or an embolism. We only perceive the immediate gratification.

The news tells us about global warming, melting glaciers, increasing temperatures of the oceans. In the summer of 2017, the largest iceberg in the world split up from Antarctica and in 2018 the northeastern United States was hit by heavy storms of ice, rain and snow that apparently originated in the Arctic warming (this year began to melt early, in February). We know that sea levels are rising and the coastal cities in the Gulf of Mexico and the islands north of the Caribbean have been affected by more intense hurricanes and tornadoes than ever. We witness more earthquakes, devastating fires (related to droughts), endangered species, toxic algae blooms, all phenomena of unprecedented intensity[2]. The key question is whether these occurrences are a consequence of human activity or not.

One of many examples we could offer about the disconnection between our lifestyle and the impact we cause on the planet, is how comfortable we get to feel with the practice of buying products packed in plastic because (we shrug the shoulders) we can throw the container in recycling bins. But do we question where this waste is going? Much of the plastic that we throw away has to be transported (with a high fuel use) to the recycling centers. But also, the recycling process itself consumes energy or in many cases the plastic ends up being transported throughout the world[3]in huge tankers that leave a trail of lethal oil in the water, to be later deposited in batches on Third World countries fields[4]. And, what will happen to objects made of recyclable material when they their use value ends?

Another example of our disconnection: the Pacific Ocean draws approximately ten metric tons of plastic fragments to the beaches of the Los Angeles, California area. Birds, turtles, seals and other marine animals confuse plastic debris with food (their smell and appearance deceive them) and the animals can die from malnutrition, chemical poisons in the plastic or intestinal obstruction. In some cases, they get stuck or entangled in objects such as fishing nets. Can you guess where all that plastic comes from? The lack of regulation of certain industrial processes (production, waste disposal) is also responsible for both pollution and the consequences of the presence of plastic in the environment.

The United Nations has issued a resolution that seeks to eliminate plastic in the oceans in 200 countries, but they estimate that the task will take at least thirty years when it may already be too late (at present, about 115 marine species are affected by plastic debris). Presently, countries like Spain do not know what to do to dispose of the millions of plastic bottles that are thrown away every day. From the moment I write to the moment you’ll read this, it’s very likely the statistics will be worse. However, markets are still filled with plastic containers that we sometimes have no option but to buy and take home (shampoos, alcohol, medicines, all come in plastic bottles).

There is consensus in the scientific community (expressed by the Intergovernmental Panel on Climate Change or IPCC for its acronym in English) that human activity is modifying the atmosphere and affecting the planet. But legislators, the president of the United States, and many media still doubt these conclusions and are even reversing the advances made in the protection of the environment. The interests of large corporations, which are not willing to bear the costs of re-engineering, necessary to prevent future emissions of greenhouse gases, are behind this problem.

The careless appropriation and abuse of resources and mindless consumerism ignores the impact we’re having on the planet. Add the use we make of fossil fuels or the waste that we generate. In the main cities of countries like the United States, up to forty percent of the food that is produced is dumped and as long as the water continues to flow in the tap we will not realize the consequences of the insensible waste of water and wood, resulting from the expanding urban population.

The media also constantly inform us about acts of terrorism, wars, people displaced by violence, refugees, famines, natural calamities, human and drug trafficking, mass dismissals, corporations that sink overnight and others that are they amalgamate to form huge and all-powerful corporations. Symptoms and consequences of our disconnection as humanity.

[1] Urban population in 2014 constituted the 54 percent of the global population while in 1960 it was a 34 percent, and it continues to grow.
[2] In just a month (August-September 2017) three hurricanes, Harvey in Texas, Irma in Florida and María in Puerto Rico cause immense damages (calculated in 500 billions of dollars). Damages cause by Maria are considered the worst disaster ever registered in Dominica. At the same time, the very dry summer came with fires that affected 10.000 buildings and houses and 47,000 acres in 2017. New fires are ongoing.
[3] China recently banned the imports of foreign waste (they were recycling but the waste received was not properly sorted out). The U.S., Europe and Japan are having trouble finding an alternative. The European Union is considering a tax on plastics and some countries have started to ban the use of plastic bags, cups, plates, straws and plastic bottles. To give you an idea of the dimension of the problem: They have estimated that around 4.73 billion plastic cups are thrown away every year only in France.
[4] I hesitate in using the term Third World, which was coined in the fifties and might mean something completely different now. However, I’ll use it to designate the group of countries that are less developed technologically and where the living conditions, health indicators and income of most of the population is the least favorable.